The two birth flowers for May are the fragrant white flowers of the Lily of the Valley and the Hawthorn, which both flower in spring in the Northern Hemisphere.

May Birth Flower: Lily of the Valley

The primary birthday flower of May is Lily of the Valley, a scented woodland plant that blooms in spring.

The first part of the scientific name Convallaria majalis means 'in the valley', referring to the European wooded valleys where the plant grows naturally, and the second part means 'belonging to' or 'of May'.

The Lily of the Valley has been used as a floral emblem in Yugoslavia, Finland and Norway; and it has become customary to give this flower as a symbol of spring on May Day in France. 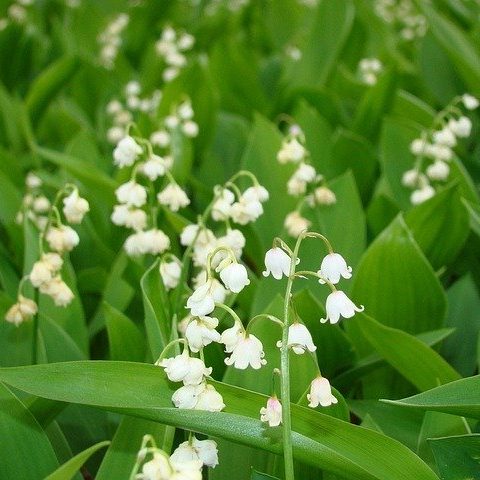 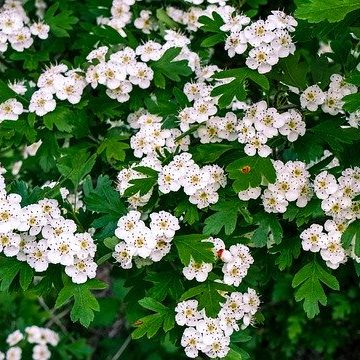 The second flower for May is the Hawthorn, a common shrub to small tree that also produces fragrant white flowers in the spring, known as the May-tree in some countries.

The red edible fruit known as 'haws' and the thorny branches have given rise to other common names such as quickthorn, whitethorn, thornapple, and hawberry.

Hawthorns feature in many cultural customs across Europe and Britain.

The language of flowers introduced in Victorian times says that the Hawthorn and Lily of the Valley symbolize happiness, humility and sweetness.

The Language Of Flowers As Seen On Antique Jewelry Caskets

Flowers have been greatly esteemed since the dawn of civilization. Ancient Egyptians painted them on their temple walls and the withered remains of flowers have been found in ancient tombs around the world. The colorful and fragile beauty of flowers has given rise to countless culturally symbolic meanings, and folktales about flowers have abounded from the earliest times although not in the Western World until the end of the Middle Ages. Floral representations have been added to all forms and materials of artistic effort - paintings, metal ware, furniture, fabric and so on. Floral names have even graced our daughters. Although less common now, names such as Rose, Daisy, Myrtle, Pansy, and even Honey, were once quite popular.

In Europe, correspondence through flowers began in the 1700's, when Charles II of Sweden introduced the Persian custom referred to as the "Language of Flowers." The advent of the Industrial Revolution and the reign of Queen Victoria (of England) combined to spread the idea of sentimentality with floral motifs. Victorian homes were elaborately decorated with florals on the walls, furniture, paintings, utensils, and trinkets. A gift of flowers held much significance; each blossom conveying a message. An entire conversation could be expressed through the exchange of flowers!

The many legends attached to flowers might be divided into three classes: the mythological, the ecclesiastical/ historical, and the poetical. The mythological legends often relate to "creation" stories as well as the transformation by the gods of luckless nymphs and youths into flowers and trees, which have since kept their names. Many stories describe the origin of the color of blossoms. For example, white flowers are represented as having originated from fallen tears, and pink or red flowers from blushes or blood. The ecclesiastic/historical legends are generally due to the reverent imaginings of Catholic monks. While tending their flowers in the quiet and seclusion of monastery gardens, they may have associated a certain flower with a memory of some favorite saint or martyr, and allowed their fancy to weave a fiction to perpetuate the memory of that saint. Many historical legends pertain to favorite sons and daughters of the Church. The poetical legends include the numerous fairy tales in which flowers and plants play an important part, and which may include elves, trolls and witches. In more recent history (the Victorian era), flowers came to be a language of symbolic content.

The following represents a brief summary of just a few of the many tales about the blossoms that came to hold so much meaning during the Victorian period:

Grapes, one of the oldest cultivated fruits, have appeared as a decorative motif throughout time I nearly every culture. In some countries, the grape was believed to have been the forbidden fruit of the Tree of Knowledge in the Garden of Eden. They have been said to signify fertility, sacrifice, hospitality, and charity. To dream of Grapes foretells to the maiden that her husband will be cheerful and a great songster. If the dreamer is in love, the grapes foretell a speedy union, and denote much happiness in the marriage and success in trade. According to another authority, to dream that you see clusters of Grapes hanging round about you, predicts future advancement and honor. To the maid it implies marriage with an ambitious man, who will arrive at great station, but die early.

According to a German tale full of melancholy and romance, a young couple was walking along the banks of the Danube on the eve of being united. They saw a cluster of Forget-Me-Nots floating on the stream which was bearing it away. The bride-to-be admired the beauty of the flower and lamented its fatal destiny. Her lover plunged into the water to secure the flowers. No sooner had he caught them than he found himself sinking. Making a last effort, he threw the bouquet onto the bank at the feet of his betrothed and, at that moment of disappearing forever, exclaimed, "Vergiss mein nicht!" (Forget me not!)

Lily of the Valley

Lilies of the Valley, also called "Virgin's Tears," have blossoms that were thought (during the mid-1500's) to possess a perfume highly medicinal against "nervous affections." The water distilled from them was in such great repute that it was kept only in vessels of gold and silver. There is also a legend that in the forest of St. Leonard, where the hermit-saint once dwelt, fierce encounters took place between him and a dragon. The holy man finally succeeded in driving the dragon away, and the scenes of their battles were revealed afresh each year, when beds of fragrant Lilies of the Valley appeared wherever the earth had been sprinkled by the blood of the warrior saint.

The Daisy has been called the "poet's darling." Shakespeare and Wordsworth, and many poets in between, have used the Daisy to represent the quality of pure innocence. The ancient English name of this flower was Day's Eye, from which came its present name. Chaucer called it the "ee of the daie," probably from its habit of closing its petals at night and during rainy weather. There once was a popular superstition that if you failed to put your foot upon the first Daisy of spring, Daisies would grow over you before the year was out. Another tale was that Spring had not arrived until you could put your foot upon twelve Daisies. Today, we enact the popular tradition. "He loves me, he loves me not." It is considered lucky to dream of Daisies in Spring or Summer.

The common Clover has a rich symbolic folklore--not just about its leaves, but also its blossoms. It was used in festivals of the ancient Greeks. Hope was depicted as a little child standing on tiptoe, holding a Clover blossom in his hand. The Druids also used clover in their ceremonies. More recently, to dream of seeing a field of Clover indicated health, prosperity, and much happiness. A fairy tale from Cornwall goes like this: One evening a maiden set out to milk the cows later than usual, and the stars had begun to shine before she completed her task. An enchanted cow was the last to be milked, and the pail was so full that the milk-maid could hardly lift it to her head. So she gathered some handfuls of grass and Clover, spreading it upon her head, in order to carry the milk-pail more easily. But, no sooner had the Clover touched her head, then suddenly hundreds of little people appeared surrounding the cow, dipping their tiny hands into the milk and gathering it with Clover flowers. When the astonished milk-maid reached home, she recounted this wonderful experience to her mistress who at once cried out, "Ah! You put a four-leafed clover on your head."

Joanne Wiertella has been collecting cast metal jewel boxes for more than 20 years. When she visited antique shops, dealers just didn't seem to know very much about them. And so began her quest for information. Learning that there was virtually nothing current written about these beautiful boxes, she began to research trade papers - periodicals and catalogs of the early 1900's. They say that "everyone has a book in them," and so she wrote and published her own: THE JEWEL BOX BOOK: The Definitive Guide to American Art Metal Jewelry Boxes 1900-1925. Hardcover: ISBN 0-9763710-0-6; Paperback: ISBN 0-9763710-1-4. The book includes descriptions of typical styles, floral motifs (and their meanings), metal composition, finishes, trademarks/patents/copyrights, sample catalog pictures, manufacturers (like Jennings Bros, Weidlich Bros, Benedict, K&O, NB Rogers), 500 color photos of jewel boxes, a guide to dating jewel boxes, and a value guide.

Article link: The Language Of Flowers As Seen On Antique Jewelry Caskets

Republished with permission from EzineArticles.com 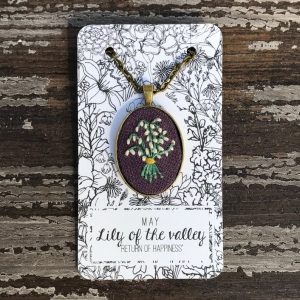 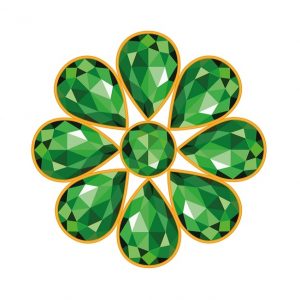 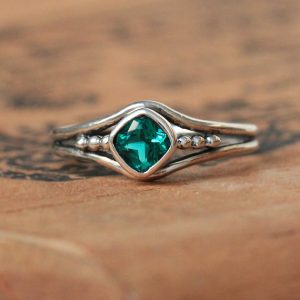